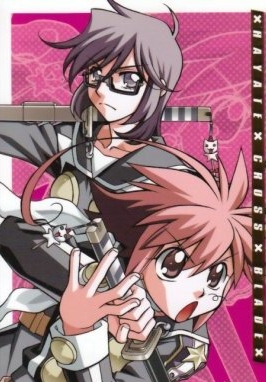 "Holding the highest of goals and striving for nothing short of absolute excellence... That, ladies, is 'brilliance.' It is well worth it never to let your brilliance dim, ladies. Money. Power. Fame. All these I will give in abundance to the brightest among you."
— Hitsugi Amachi
Advertisement:

Tenchi Academy is introduced as a prestigious girls' school, unique in its Sword Scholarship program in which teams, known as "shinyuu", battle each other for bragging rights and the hefty monetary rewards given to victorious teams. A more detailed outline of this system, known as hoshitori, can be found on its page at the other wiki

Enter Hayate Kurogane, trying to impersonate her twin sister Nagi in the school until Nagi is out of rehabilitation. Initially disinterested in anything outside retaining her sister's scholarship, Hayate resolves to actively take part in battling when she finds out that their old orphanage is 8 million yen in debt with the Yakuza. Seeking out the surly Ayana Mudou, who had fallen from the upper ranks after abandoning battling in general, Hayate embarks on her mission, encountering Loads and Loads of Characters in the process.

Hayate × Blade first began in Media Works' Dengeki Daioh magazine in 2003, but later moved to Shueisha's Ultra Jump magazine in 2008, where it continued until its conclusion in 2013. It has a total of 18 published volumes and 6 drama CDs. The first Ultra Jump run concluded with its 110th chronological chapter across both magazines (titled "Overtime," the previous chapter was titled "Final," instead of a sequential number); Hayate × Blade 2, with "2" pronounced as "nyan," began serialization in the October 2013 issue of Ultra Jump and ended in 2017. It is notable for having the word "baka" in every chapter title, which has been described by some fans as a reference to not only the main character but also the whole cast. Written by Shizuru Hayashiya and published in America by Seven Seas Entertainment, this series is a comedy stuffed full of Les Yay.

There is now a Character Page. It is hoped that character-related tropes will be focused there, with this page having tropes that describe the series itself.

Not to be confused with another Hayate and Nagi.