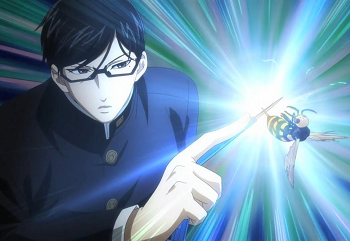 Super Fly Reflexes is when a character uses a hard-to-catch insect like a fly or gnat to show off their astounding reflexes. Usually by snatching it out of the air, though other common variations including hitting it with the point of a sharp object like a dagger or pin, or even slicing it in half in mid-air with a sword. Or Improbable Chopsticks Skill.

This can be done to show the character's amazing training and skill, or simply to show off the superpower.