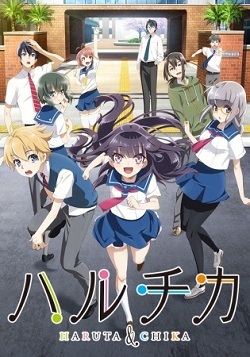 HaruChika:Haruta and Chika—or just HaruChika for short— is a series of novels by Sei Hatsuno and published by Kadokawa Shoten.
Advertisement:

The plot here involves Haruta and Chika who are members of their high school wind instrument club that is on the verge of being shut down because there are only four members. The two are childhood friends that got split up, but reunited nine years later and they spend their days studying and also trying to recruit new members. When a mysterious event occurs within their school, they band together in order to solve the mystery.

The series received an Animated Adaptation for the Winter 2016 Anime season by P. A. Works with character design by NamanikuATK of nitro+. It is licensed by Funimation for North America. After the anime ended, the adaptation continued in the form of two drama CDs that follows their adventures up until their graduation in 3rd year. The series also received a live Action adaption in 2017, including an original story that deviated from novel canon.