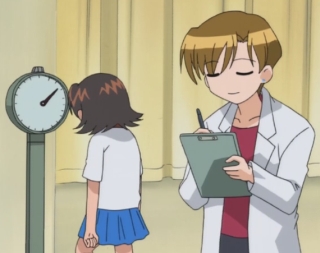 A Japanese cultural trope often seen in manga and anime series that take place in a school setting, measuring day is the students' annual full physical examination. This usually takes place during the course of a whole day and is often used for fanservice. Since Most Writers Are Male expect lots of jokes in which certain physical quantities of (female) students get compared — or where one of the girls gets a chance to really freak out about her weight problem, imagined or not. Conversely, a lack of growth, embarrassing or inappropriate underwear or an inappropriate body under the underwear are also sources for potential angst, making measuring day a special trial for a Wholesome Crossdresser or a Sweet Polly Oliver. In addition, there's the usual group of guys that always try to peek on the girls' examinations.