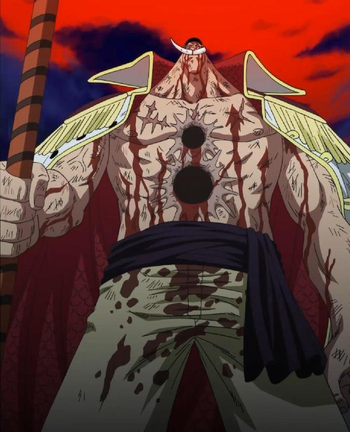 "Even in death... his body refuses to yield."
"To each of us falls a task. All the Emperor asks of us guardsmen, is that we hold the line and die fighting. It's what we do best: we die standing."
— General Sturnn, Dawn of War: Winter Assault
Advertisement:

He's dead. His body is just twitching a bit. And yet, he doesn't fall, his muscles so perfectly conditioned they can continue to function without any signals from his brain. So he just stands there like a morbid practice dummy. He's died standing up.

This is a device used when a character is so utterly badass that even in death they refuse to accept utter defeat. The body continues to strive for victory even when its driving will has been extinguished. This goes hand in hand with a Badass Normal or any other absurdly strong character, especially one with a Charles Atlas Superpower. It may be mixed with Taken for Granite, when a villain's magical body has No Ontological Inertia and turns to stone at the moment of death. Despite the description above, this can happen to both heroic and villainous characters. In addition, this trope for some reason often tends to be paired with Off with His Head!, and scenes where the body waves its arms around looking for the head, or walks around for a while before collapsing are common.

This is technically possible in Real Life (especially with the help of rigor mortis, but see Real Life, below), though absurdly unlikely, and in any case a corpse's lack of balance control will cause it to topple sooner or later. The realms of fiction simply contrive to end the scene before this happens.

In deference to gravity, falling to one's knees also counts, so long as the final plunge into a prone state doesn't follow. Taking another step forward despite being clearly dead also counts. Related to You Are Already Dead. Compare to Fell Asleep Standing Up.

As a Death Trope, beware of SPOILERS.

Based on Scissors' lack of movement or dialogue and tumbling over with a light touch, it seems Scissors died (he normally does talk and move). Yet, Scissors still somehow stands.

Based on Scissors' lack of movement or dialogue and tumbling over with a light touch, it seems Scissors died (he normally does talk and move). Yet, Scissors still somehow stands.