Film / Son of the Morning Star 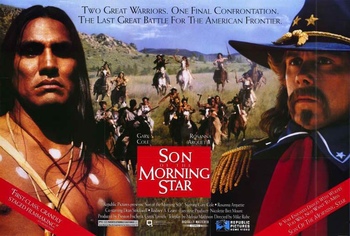 Son of the Morning Star is a 1991 TV movie directed by Mike Robe.

The film, which originally aired on ABC in two parts, is the story of the Battle of the Little Bighorn

It recounts the history of the northern plains from 1866 to 1876 through two different perspectives. One thread follows Custer, starting with his post-Civil War career fighting Indians in Kansas. Custer is court-martialed for leaving his command and placed on suspension from the army for a year. He returns to command, and makes a name for himself by attacking and destroying a peaceful Cheyenne camp on the Washita River. Yet advancement in rank does not come, and Custer pisses off President Ulysses S. Grant by his testimony at a Congressional hearing on corruption in the Grant administration. Only reluctantly does Grant allow Custer to have command of the 7th Cavalry for its fateful 1876 campaign against the Sioux.

The other thread follows Kate Bighead, a Cheyenne native who first meets Custer in Kansas in 1866. Bighead recounts the history of broken promises and violence that marks relations between Native Americans and their white oppressors. She is there when Custer and the 7th Cavalry fall on the Cheyenne at the Washita in 1868 and annihilate a peaceful village. She recounts the 1868 treaty that gives the Black Hills of South Dakota to the Sioux, and how the treaty is broken by the white man when gold is discovered in the Black Hills in 1874. She tells the story of Crazy Horse and how he rose to a leadership position among the Sioux. Finally Bighead and the Cheyenne join Sitting Bull's and Crazy Horse's Sioux, and meet Custer and the 7th Cavalry at the Little Bighorn on June 25, 1876.

Based on Evan S. Connell's nonfiction book, Son of the Morning Star. And since it was based on a non-fiction narrative it's far more accurate to history than most other Custer works, either pro (They Died with Their Boots On) or anti (Little Big Man).