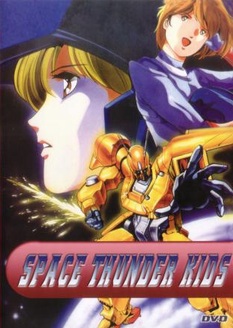 Those of you who are familiar with Joseph Lai's body of work, this is Thunder Prince IN SPACE!. A very, very bad Humongous Mecha pseudo-anime released in 1991 about three children (or three teams with three children each depending on how you interpret it) that can pilot giant robots trying to defeat the Big Bad and his army: the Dark Empire. There are also some Space Opera elements thrown in with advanced space stations and dogfights going on in space.

This decidedly weird animated film is a result of Joseph Lai buying South Korean cartoons on the cheap and editing them to make "new" features. The result is a Frankenslation after putting all the different shows together. Lai made many films like this, but Space Thunder Kids stands out as arguably the strangest and most incomprehensible of his infamous works.

This "film" was edited with footage from Savior of the Earth, Defenders of Space - Phoenix-bot Phoenix King, King Robot, Protectors of Universe - Super Express Mazinger 7, Solar Adventure, Space Transformers - Micro-Commando Diatron-5, Super Mazinger 3 and Iron Man Trio. All of the aforementioned movies are also ripoffs of other anime like Mazinger Z (and all but the last were separately dubbed by Joseph Lai as well).

Has nothing to do with UFO Robo Grendizer's Finishing Move.