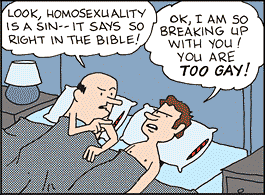 "I agree with 95% of the Republican platform. I believe in local government. I'm in favor of individual rights rather than group rights. I believe free markets lead to free people and that the country needs a strong national defense. My life doesn't have to be about being a homosexual. It doesn't have to be entirely about that."
— Congressman Matt Skinner, The West Wing
Advertisement:

This trope is about homosexual political conservatives, typically in settings where homosexuality and conservatism are at least somewhat incompatible, as they appear in fiction. It's much more common in American than in European media, since the European brand of conservatism does not necessarily go hand in hand with the religious right. Typically this is done for one of the following reasons:

See also Writer on Board and Straw Character for some of the ways this trope can go bad. Compare Blonde Republican Sex Kitten and Black Republican, and yes, gay conservatives do in fact exist in real life. No Real Life Examples, Please!, however, as this is about their portrayal in fiction.

When Stan Smith is baffled at how one can be both gay and Republican, Greg Corbin decides to explain it to him- in song!

When Stan Smith is baffled at how one can be both gay and Republican, Greg Corbin decides to explain it to him- in song!