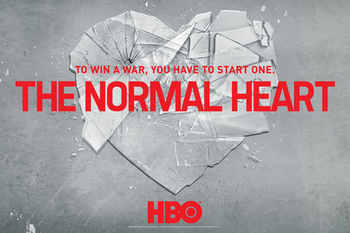 "I am trying to understand why nobody gives a shit that we're dying!!"
—Ned Weeks
Advertisement:

The Normal Heart, a landmark play by Larry Kramer, is a romanticization of Kramer's life in New York City during the early 1980s at the dawn of the AIDS epidemic. It depicts the events leading to the creation of the nonprofit GMHC, as well as his relationship with Felix Turner.

It was turned into a movie in 2014 by Ryan Murphy, with Mark Ruffalo in the lead role of Ned Weeks, Matt Bomer as his partner Felix Turner, Julia Roberts as Dr. Emma Brookner, and Jim Parsons as Tommy Boatwright.

This play and its movie adaptation provide examples of: