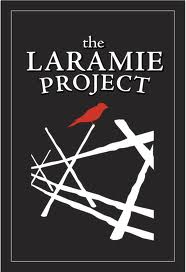 The Laramie Project is a play by Moises Kaufman and members of the Tectonic Theater Project about the aftermath of the 1998 murder of openly gay college student Matthew Shepard in Laramie, Wyoming. The play draws on hundreds of interviews of Laramie residents conducted by the members of the Tectonic Theater Project (led by Moises Kaufman), as well as news reports and company members' journal entries. Together, these pieces fit together to form the story of how Matthew Shepard died, the reaction both of Laramie and the country at large, and the trials of his murderers Russell Henderson and Aaron McKinney.
Advertisement:

The piece is widely regarded as the most influential play centered on homosexuality since Angels in America. It is used in schools across America and the UK to teach about prejudice and tolerance, and has inspired grassroots efforts to combat discrimination.