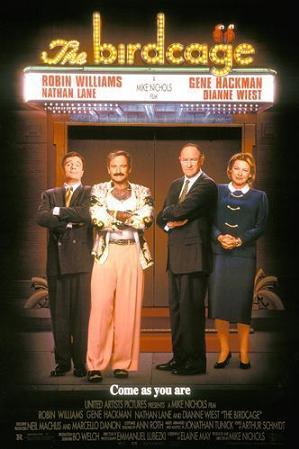 Albert: Don't use that tone to me.
Armand: What tone?
Albert: That sarcastic, contemptuous tone that means "you know everything because you're a man and I know nothing because I'm a woman."
Armand: You're not a woman.
Albert: Oh, you bastard!
Advertisement:

Val Goldman (Futterman) and Barbara Keeley (Flockhart) are engaged to be married, and have decided that their families should meet. Barbara comes from a conservative Christian family; its patriarch, Senator Kevin Keeley (Hackman), is a Moral Guardian politician running for re-election. When one of Keeley's close political friends dies in the bed of an underage, black prostitute, Mrs. Keeley (Wiest) suggests they visit the fiancé's family to discuss wedding plans and escape the scandal and the press; a "traditional, wholesome" all-American marriage could be just what the Senator needs to save his career.

Unbeknownst to Barbara's parents, however, is that Val's family consists of a Jewish gay couple who own a South Beach drag club called the Birdcage. Not only does Val's father Armand Goldman (Williams) live above and run the club, but his partner Albert (Lane) is the show's star drag queen "Starina". With the Keeleys already driving down from Ohio, the Goldmans have to quickly pile together a story and drastically redecorate, recreating themselves as the "Coleman" family and Camp Gay Albert as an Uncle in the hope they can get past Heteronormative Crusader Keeley.

There's no way this could possibly go wrong...

The Birdcage provides examples of the following tropes: