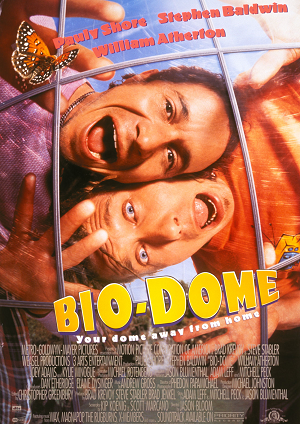 Briefly, a group of people are sealed into a Bio-Dome which is supposed to be a miniature self-sufficient ecology, sealed off from the outside world. One of these people is played by Pauly Shore. Hilarity Ensues.

In more detail: Bud Macintosh (Shore) and Doyle Johnson (Stephen Baldwin) are your average slackers, neither particularly bright, nor particularly attractive. Somehow they managed to get hot girlfriends, Monique and Jen (played respectively by Joey Lauren Adams and Teresa Hill). The two girls are very interested in environmental efforts and quite fed-up with the two slackers' indifference towards it.

While traveling in the Arizona desert, our not-too-bright duo discover the Bio-Dome. A group of scientists is about to be sealed inside for a year for research purposes. The duo decides it is a new mall and enters just before the building is sealed. Now the scientists have to endure the many ways the duo are destroying the environment within the Dome, while the lady scientists have just met their new stalkers. Not that the guys want to cheat on their girlfriends, they act as if flirting with any attractive woman is obligatory. Sleeping with her is not. Among the few actually named scientists are the project lead Dr. Noah Faulkner (William Atherton) and Dr. Petra von Kant (Kylie Minogue).

Not to be confused with the zoological institute

in Montreal, Canada (due to how that's just one word).

Tropes Used in This Movie: