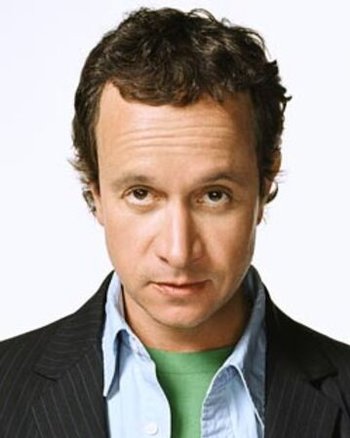 "Hey, b'uuuudy!"
"When you put yourself out into the world and say, 'Hey, look at me,' you're going to get criticized."
Advertisement:

The youngest son of the late comedian Sammy Shore and the late Comedy Store co-founder Mitzi Shore, Pauly followed in his parents' footsteps and began performing standup himself in the mid-80s at the age of 17. Here, he'd develop his most popular character, "The Weasel," a stereotypical California surfer/stoner "dude" who spoke in a broad San Fernando Valley accent and used phrases like "stoney" or "major."

After a modest start on a few sitcoms in the late 80s, Shore got his big break in 1989 as an MTV VJ. By 1992, he was their most popular host, regularly hosting the channel's spring break specials and even his own show, Totally Pauly, and had made the leap to feature films with the Cult Classic Encino Man. From then until 1995, he'd star in three more star vehicles, one released per year and all of which had him playing variations of his "Weasel" character: Son in Law, In The Army Now and Jury Duty. He'd also voice an animated variation on the character in A Goofy Movie, serving as one of the film's many beloved mid-'90s artifacts.

Unfortunately for Shore, these efforts from various studios to capitalize on his popularity and schtick as quickly as possible and the failure thereof undid all of his success overnight. After co-starring in critically-savaged Bio-Dome, which today is considered one of the worst films ever made, he became a walking punchline (take a drink every time either Animaniacs or Pinky and the Brain makes fun of him). Shore made one last attempt at a vanity project a year later with the FOX sitcom Pauly, which was canceled after five episodes.

Despite the boom and bust of his popularity in the '90s, Shore has otherwise retained a steady career since, continuing to do standup comedy and act, usually playing comically exaggerated versions of himself. In 2003, he wrote, directed, produced and starred in the indie mockumentary, Pauly Shore Is Dead, to date his most critically successful film (make of that what you will). In 2005, he had a short-lived reality show, Minding The Store, which documents both his attempts to revitalize his acting career and run his mother's famed comedy club.

He currently hosts The Pauly Shore Podcast Show on YouTube.