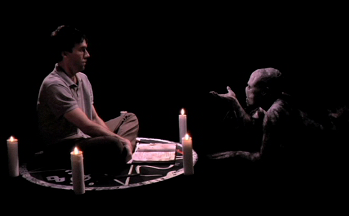 You summon me for love?
Advertisement:

An independent film made in 2009, Lo is first and foremost a love story. Albeit, a love story with demons, infernal pacts and demonology books. A loner named Justin falls in love with a quirky girl named April. She is kidnapped by demons, and leaves behind a book. Looking for any clue to save April, he finds a bookmark, showing how to summon a demon named Lo. So he does. Enter Lo.

Notable for taking place entirely in one room and remaining gripping despite the fact.