Film / The Limits of Control 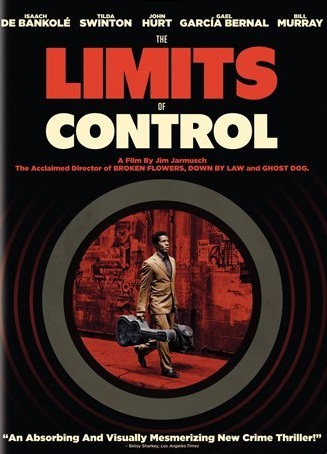 This is not a film about what happens. It's a film about arresting images, atmospheric sounds, and how they work together to create something beautiful.
— (Review

The Limits Of Control is a movie by Jim Jarmusch released in 2009.

A man without a name is given a mysterious assignment in an airport. He takes a plane to Madrid, goes to a high-rise flat, waits, goes to a café, orders two espressos in separate cups. He goes to a museum and stares at a painting of a violin. The next day at the café, a man with a violin case comes and asks him if he speaks Spanish. They exchange matchboxes. Inside the matchbox are instructions that he memorizes and then eats. He goes to the museum and stares at the painting of a nude woman.

Back at the flat, a naked girl with glasses waits for him. She asks if he likes her ass and suggests they have sex. He says, "Never while I'm working". The next day, at the café, a woman with a cowboy hat and a white-haired wig comes up and asks him if he speaks Spanish. They exchange matchboxes. She tells him, "The best films are like dreams we're never sure we really had." He gives the matchbox to the naked girl; it contains diamonds, which, we are reminded, are a girl's best friends.

He takes the train to Sevilla. A Japanese woman asks him whether he speaks Spanish. They exchange matchboxes. Instructions, etc. He goes to a hotel room and waits. He goes to a club and watches flamenco dancers rehearse. He goes to a café and orders two espressos in separate cups. A man with a guitar comes up and asks him whether he speaks Spanish. Matchboxes, etc. He keeps the guitar. He takes the train to a small village. A man with a cowboy getup asks him whether, etc. He gives the guitar. He is taken to an abandoned hamlet and given a map. He walks in the desolate landscape and arrives at a fortified and heavily guarded compound.

Back at the hamlet, the naked girl is asleep in a bed with a matchbox in her hand. He somehow infiltrates the compound. An angry executive type in a bunker asks him how he did it, and he says he used his imagination. Then he kills the man, using a string from the guitar. Then he goes back to Madrid, changes his clothes and disposes of them, and disappears.