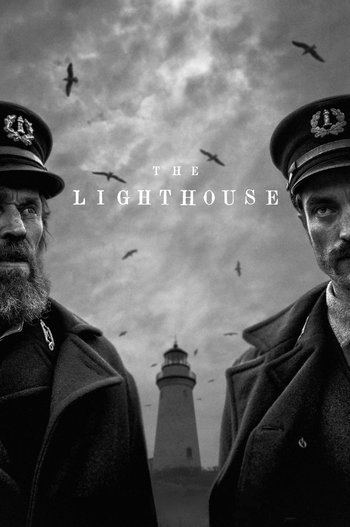 "How long have we been on this rock? Five weeks? Two days? Where are we? Help me to recollect."
"What's the terrible part of the sailor's life, ask ye, lad? 'Tis when the workin' stops when yer twixt wind and water. Doldrums. Doldrums. Eviler than the Devil. Boredom makes men to villains...and the water goes quick, lad, vanished."
— Thomas Wake
Advertisement:

The Lighthouse is a 2019 American film directed and co-produced by Robert Eggers (The VVitch) and starring Willem Dafoe and Robert Pattinson. The film's genre is hard to describe, so for brevity's sake we'll call it a period psychological thriller.

In the 1890s, a young drifter named Ephraim Winslow (Pattinson) comes to an isolated island off the coast of New England to serve as an assistant to the crusty old lighthouse keeper Thomas Wake (Dafoe). It doesn't take long for Winslow to grow frustrated with Wake's lack of respect for him, and the isolation of the lighthouse only fuels their animosity.

Just as the two men begin to grow accustomed to each other, a fierce storm arrives and prevents relief from coming, leaving them stranded together. Soon after, events begin to unfold that may be the result of the men's fraying sanity, or a curse from the sea itself.

Eggers co-wrote the film's script along with his brother Max, whose attempts at creating a contemporary version of Edgar Allan Poe's unfinished story "The Light-House" served as the origins of the film (although following Eggers' entry into the project, the Poe elements were largely removed). The film was produced by Regency Enterprises and A24, debuting at Cannes Film Festival on May 19, 2019 before receiving a wide release on October 18, 2019.

The Lighthouse contains examples of:

"Why'd you spill your beans?"
Feedback