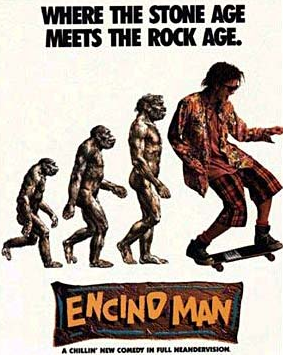 In the first Ice Age, a Cro-Magnon man (Fraser) is caught in an avalanche and ends up frozen in a block of ice. Millions of years later, in what eventually becomes Encino, California, that block of ice winds up in the back yard of a popularity-obsessed high-school senior named Dave (Astin), who finds it while digging his swimming pool. Hoping that his discovery will earn them fame, fortune and, most importantly, the affection of his crush Robyn (Megan Ward), Dave enlists the help of his air-headed friend Stoney (Shore) to dig the cave man up and thaw him out. Once unfrozen, the two clean him up, dub him Link (as in "missing link") and bring him to their school, passing him off as an Estonian exchange student while educating him on everything that late 20th century suburbia has to offer.

Hilarity Ensues.Followed in 1996 by a Gender Flip Made-for-TV Movie sequel called Encino Woman, co-written and directed by the original film's primary writer Shawn Schepps (no one else from the original was involved).