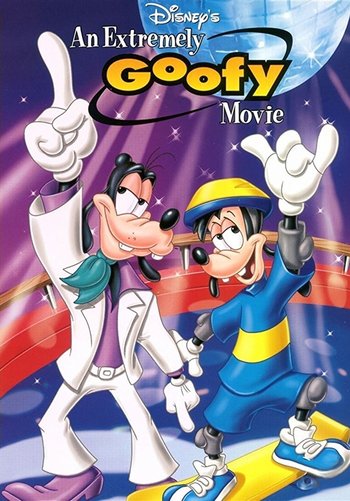 They're back and goofier than ever!
Advertisement:

An Extremely Goofy Movie is the 2000 Direct to Video sequel to Disney's A Goofy Movie. It's the final installment of both the continuity started by Goof Troop and a show that began as part of The Disney Afternoon.

Max, PJ and Bobby are ready to go to college and are planning to participate in their college's X-Games. Upon arriving, they earn the attention of Bradley Uppercrust III, the leader of the X-Games reigning champions. Bradley offers Max a place in Gamma House, but isn't interested in PJ or Bobby. Max's reply is that "It's all of us, or none of me." They make a bet so that whoever loses the games is forced to be the other teams towel boy.

Back home, Goofy, suffering from Empty Nest Syndrome, is fired from his job when he accidentally causes a major disaster at the toy factory where he works. After being told that he's not going to be able to find another job without a college degree, Goofy attends Max's college hoping to finally graduate and try to reconnect with his son. Max strains under his father's doting presence and convinces him to join Bradley's team in an attempt to get him out his hair. Unbeknownst to the two of them, Bradley is willing to do anything to win the games. And we mean anything.

Unlike many Disney DTV sequels, the film received positive reviews from critics and audiences.

Example of:
Exploiting the Fourth Wall

Get your own life!

Get your own life!