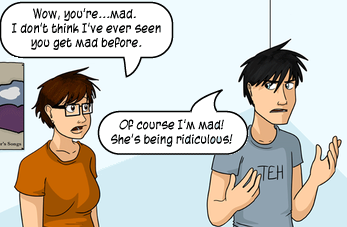 Bart: Man, I thought Mom was gonna scream me stupid. She didn't even raise her voice.
Lisa: I admit I haven't known Mom as long as you have, but I know when she's really upset, her heart won't just wipe clean like this bathroom countertop; it absorbs everything that touches it, like this bathroom rug.
Bart: Really? You think this might be one of those forever-type things?
Lisa: (shrugs)
—The Simpsons, "Marge Be Not Proud"
Advertisement:

The long form of the trope title is "Out of Character Is Serious Business."

Now, then. Some characters have strong traits that they are known by. This is for when characters momentarily break away from their normal habits to make a point about the seriousness of the situation. Often causes the other characters to do a Double Take and mention why this event is Serious Business. When most or all of these OoC moments happen at once, you can be sure that the world is ending, or at least the Darkest Hour, leading characters to behave in ways they normally wouldn't, because they know they might not have another chance to do so.

It's also a pretty good indication the Godzilla Threshold has been crossed.

This is a trope for when a somewhat-Out of Character action is used to draw extra attention to the scene (similar to a Title Drop). It isn't Hidden Depths because it isn't telling us something about the character we didn't already know; it's similar to an Out-of-Character Moment in that this is specifically the usage of such a moment to draw attention to a scene. If they're doing this deliberately to make another character think something is amiss, see Out-of-Character Alert. Compare Let's Get Dangerous! and Weirder Than Usual.

One of very few times the normally cheerful and optimistic Phineas completely loses it.

Alternative Title(s): Out Of Character Is Serious Business

One of very few times the normally cheerful and optimistic Phineas completely loses it.