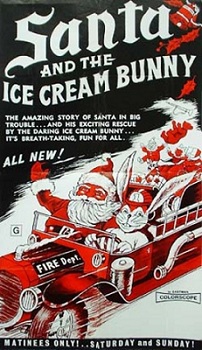 Note: film only contains trace amounts of both Santa and the Ice Cream Bunny. Also, we're just as confused by the Ice Cream Bunny as you are.
"Ladies and gentlemen, for the first time in 150+ movies, RiffTrax has nothing to say."
— Rifftrax's reaction to this movie.
Advertisement:

The intended purpose of the film was to exhibit it in one of the theater attractions at the Pirates World amusement park in Dania, Florida (near Miami), ostensibly to give children something to do for an hour while their parents took a break from them, and to advertise other attractions at the park. It would be totally forgotten today, except that the film is a No Budget, slapdash affair that turns into an unintentional Mind Screw of the highest order.

It begins with Santa and his sleigh getting stranded on a beach somewhere in Florida in inch-deep sand, his reindeer having flown back to the North Pole to cool off. Several kids (including Tom Sawyer and Huckleberry Finn) try to help him out with a variety of farm animals (and a guy dressed in a gorilla suit!), but to no avail. Just when all hope is given up, Santa is reminded of the story of Thumbelina and starts telling it to the kids.

In other words, the Santa sequence was just a Framing Device for a completely separate Thumbelina film, which takes up around two-thirds of the total runtime of Santa and the Ice Cream Bunny. It's presented in its entirety, including the opening and closing credits, and the only connection to the Santa sequence is that it was also created by Pirates World as a matinee for kids, and was even shot at the park. But, as it turns out, Thumbelina itself uses a Framing Device structure (putting this into full Nested Story territory), with a young woman (played by Shay Garner) listening to a version of the story illustrated by diorama models, leading into a musical presentation with full-size versions of the displays, in which Garner also plays Thumbelina.

After Thumbelina wraps up, we go back to Santa and the kids, and the titular Ice Cream Bunny finally makes an appearance, driving an old fire truck through Pirates World on his way to rescue Santa, though neither the character's name nor significance are ever explained.

Basically, the whole thing looks like what might've happened if David Lynch tried to make a Christmas movie for kids. It's become a So Bad, It's Good Cult Classic, even getting the RiffTrax treatment.

Oddly enough, depending on where the film was shown, certain prints replaced the Thumbelina segment with one based on "Jack and the Beanstalk", also shot at Pirates World, with Mitchell Poulos as the boy hero. There was no Framing Device in Jack, unlike Thumbelina. Alas, neither version did much to help Pirates World, which struggled after Walt Disney World opened and finally closed in 1973.

There were some genuinely reputable people involved with this movie. Barry Mahon, one of the directors, was actually a fugitive from the true story of The Great Escape. Ruth Foreman, on the other hand, was a well-respected figure in the South Florida theater scene for forty years, dying at age 81 in 1988, even having an award named after her

Santa and the Ice Cream Bunny contains examples of:

The "Thumbelina" adaptation contains examples of:

The Jack and the Beanstalk adaptation contains examples of: