Film / The Beast of Yucca Flats 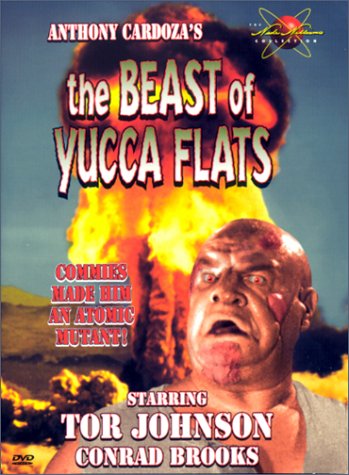 The Beast of Yucca Flats. A film by Coleman Francis.

No-one talks — the camera didn't have sound gear. A narrator. Unable to speak in full sentences. Flag on the moon. How did it get there? Nothing to do with movie. A plot point abandoned.

A topless woman is strangled. Nothing to do with the rest of the movie.

The beast kills a couple on vacation. Caught in the wheels of progress. People hunt the beast. Climb a mountain, then give up.

Boys from the city. Not yet caught up in the whirlwind of progress. A guy gets shot from a plane. Man's inhumanity to man. Beast is finally killed.

Next Sunday A.D.. A man and some robots in space. They riff the movie. People laugh. Tropers recap riffing here.

Tropes on the page. How did they get there?: