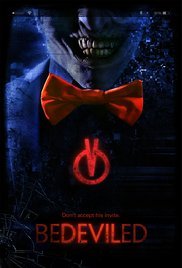 "Evil is about to go viral."

Nikki has just died, and all her friends are mourning her. However, soon after her death, they get an invite from her phone to download an app. This app, called "Mr. Bedevil" is seemingly perfect. Not only does it manage their phone impeccably, but it can even manage the electronics in their home! However, Mr. Bedevil is secretly a supernatural being, whose end goal is to make their fears come to life...