Film / Before I Wake 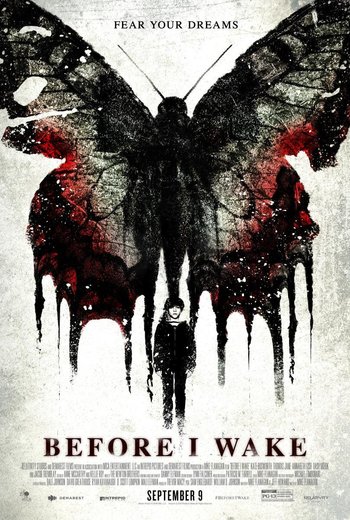 Before I Wake, also known as Somnia, is a 2016note in the U.S., the film was released in January 2018 on Netflix American dark fantasy horror film directed and edited by Mike Flanagan and co-written by Flanagan and Jeff Howard. The film stars Kate Bosworth, Thomas Jane, Jacob Tremblay, Annabeth Gish, and Dash Mihok.

Cody Morgan is an eight-year-old boy who desperately needs a family, having been in and out of the foster care system since he was barely a toddler. Mark and Jessie Hobson seem to be the perfect match, as they are trying to move on from the death of their own child Sean, who was the same age as Cody when he drowned in the bathtub. Cody is quiet, polite, and well-mannered, but he has a very special gift.

When he sleeps, his dreams manifest in the real world. Most of them are peaceful and beautiful, reflecting his love of butterflies, but like any eight-year-old, he has nightmares—night terrors that manifest as a sinister entity he calls the Canker Man...