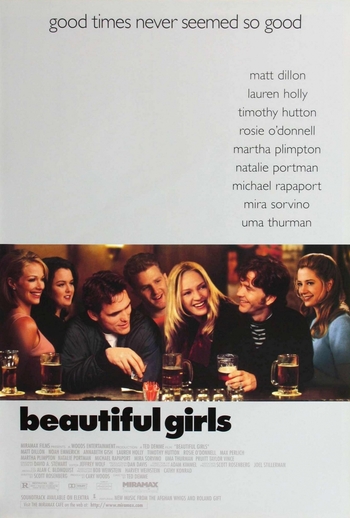 "Supermodels are beautiful girls, Will. A beautiful girl can make you dizzy, like you've been drinking Jack and Coke all morning. She can make you feel high full of the single greatest commodity known to man: promise. Promise of a better day. Promise of a greater hope. Promise of a new tomorrow. This particular aura can be found in the gait of a beautiful girl. In her smile, in her soul, the way she makes every rotten little thing about life seem like it's going to be okay. The supermodels, Willy? That's all they are. Bottled promise. Scenes from a brand new day. Hope dancing in stiletto heels."
— Paul
Advertisement:

Willie Conway (Hutton) is a struggling jazz pianist who goes back to his hometown of Knight's Ridge, Massachusetts for his high school reunion. Still living there is Tommy "Birdie" Rowland (Dillon), who was once the big man on campus at high school, but now owns his own shoveling and construction business. And even though he has a girlfriend, Sharon Cassidy (Sorvino), he's still seeing his high school girlfriend Darian Smalls (Holly) since neither of them can completely let go of the past. Meanwhile, Tommy's partner Paul Kirkwood (Rapaport) has been rejected by his girlfriend Jan (Plimpton) because he doesn't want to get married right away, and he's become obsessed with supermodels. Willie has his own baggage; he's engaged to Tracy Stover (Gish), whom he likes a lot, and is ready to quit piano playing and get a regular job, but part of him still wants to have one last fling. He, and his other friends, become attracted to Andera (Thurman), the cousin of one of their friends, and Willie also strikes up an unusual friendship with Marty (Portman), his precocious 13-year-old neighbor.

The film wasn't a big hit when it first came out (though it got decent reviews), but has since gained a cult following, partly because it helped make a star out of Natalie Portman.