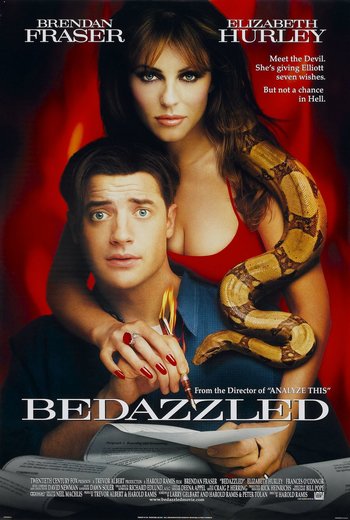 Because Elizabeth Hurley is more appealing than Peter Cook.
The Devil: Paragraph one states that I, the Devil, a not-for-profit cooperation, with offices in Purgatory, Hell, and Los Angeles, will give you seven wishes to use as you see fit.
Elliot Richards: Seven? Why not eight?
The Devil: Why not six? I don't know. Seven just sounds right.
Advertisement:

The remake of Bedazzled (1967) was released in 2000. Directed by Harold Ramis, it stars Brendan Fraser and Elizabeth Hurley.

In this version, Elliot Richards (Fraser) is a geeky and friendless office drone who is in love with beautiful co-worker Alison (Frances O'Connor), but is too shy to act on his feelings. After being ditched at a bar by his "friends", Elliot runs into a beautiful woman (Hurley) who tells him that she's the Devil and offers him seven wishes in return for his soul. While obviously hesitant, he accepts in the hopes of using his wishes to make himself into the perfect man for Alison; Hilarity Ensues.

Example of:
Hot as Hell