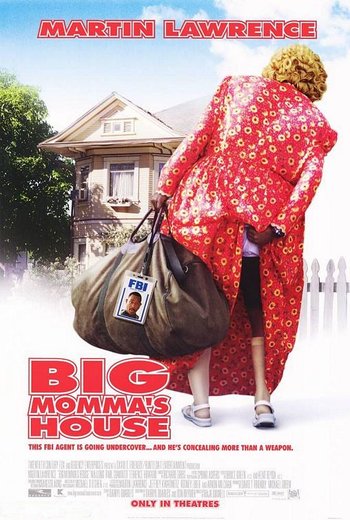 It ain't over till the fat "lady" sings.
Big Momma's House is a trilogy of films starring Martin Lawrence as an FBI agent who specializes in undercover disguises. The films are a mix of comedy and drama/action.
Advertisement:

After a bank robber (Terrence Howard) escapes from prison, his ex-girlfriend Sherry Pierce (Nia Long) flees with her young son Trent to the home of her grandmother, Hattie Mae Pierce aka Big Momma. Unbeknownst to Sherry, the real Big Momma is out of town and undercover FBI agent Malcolm Turner (Lawrence) has stepped into a Fat Suit to impersonate her. Malcolm and his partner John Maxwell (Paul Giamatti) suspect Sherry has the money from the original robbery, but Malcolm starts to doubt her guilt. Later, Sherry "meets" Malcolm out of disguise, where he introduces himself as a local electrician, giving him a chance to bond with Sherry and her son as a possible romantic partner / father figure. Malcolm is torn between his duty as an agent and his growing feelings for Sherry.

The second film, Big Momma's House 2, has Malcolm galvanized by the murder of an FBI colleague, who was undercover with Tom Fuller (Mark Moses), a former Military Intelligence Specialist now in the private sector and suspected of trying to sell an NSA backdoor on the black market. Since he has officially retired from field work for the sake of his family and his boss won't let him in on the case, he covertly reassumes the Big Momma disguise to become the new nanny at the Fuller residence in Orange County. Turner-as-Big Momma bonds with the Fullers and their three children, while trying to get to the bottom of Tom's involvement.

The second and third films were much Lighter and Softer than the first. Both were critically savaged despite an impressive box office turnout.

The third film replaces the actor who played Trent in the first two films with Brandon T. Jackson (of Tropic Thunder fame) and has Trent taking on a Fat Suit disguise.