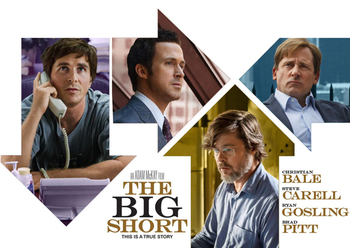 "Do you realize what you've done? You've bet against the American economy!"
Advertisement:

The Big Short is a 2015 comedy-drama film based on Michael Lewis' 2010 nonfiction book of the same title, directed by Adam McKay and featuring an All-Star Cast including Steve Carell, Christian Bale, Ryan Gosling, Brad Pitt, Marisa Tomei, Karen Gillan and Melissa Leo. Set in the mid-2000s, it follows several people in the financial industry as they begin to realize that the housing market is unstable, and that they can make big bucks by betting against it.

The same scenes' crosstalk leads both parties to go to the American Securitization Forum in Las Vegas.