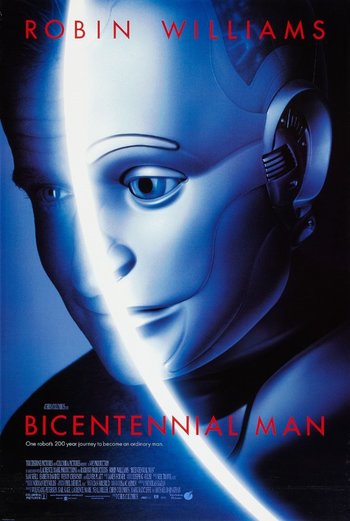 A 1999 Science Fiction Film directed by Chris Columbus (with screenplay by Nicholas Kazan), adapting the Drama of Isaac Asimov's "The Bicentennial Man" while adding comedy to develop Andrew's personality. The film also makes a number of references to The Positronic Man, by Isaac Asimov and Robert Silverberg.

He spends decades at this job, watching as Little Miss grows up (and is now played by Embeth Davidtz) and growing up in his own way, with upgrades and experiences. After Sir dies, Andrew decides to go on a quest to discover his destiny, which leads him to another NDR114-series robot with modifications, Galatea (played by Kiersten Warren), and her owner, Rupert Burns (played by Oliver Platt). With Rupert's help, Andrew begins designing prosthetics that will give Andrew a human appearance.

He heads home to show Little Miss the result of his journey and meets her Identical Granddaughter, Portia Charney (also played by Embeth Davidtz), at which point the plot changes to focus on their quirky relationship and Andrew's fight to convince first her, then the world, that he is human enough to marry.