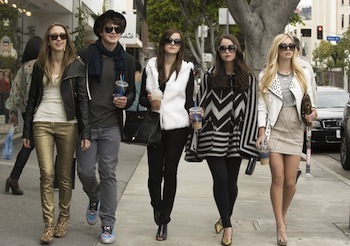 The Bling Ring is a 2013 teen crime drama film and the fifth film written and directed by Sofia Coppola. It stars Emma Watson, Taissa Farmiga, Leslie Mann, as well as newcomers Israel Broussard and Katie Chang.

Inspired by actual events, the story begins with Marc (Broussard), a teenage boy who has recently transferred to a school in Agoura Hills. Eager to fit in, he strikes up a friendship with the wild and free-spirited Rebecca (Chang), who idolizes Lindsay Lohan and the wider lifestyle of glitz and glamour surrounding her. It soon becomes clear that Rebecca has very little sense of inhibition towards her obsessions, and Marc becomes a tag-along to burglaries of unlocked cars and homes for personal thrills and high-end goods.

One day, they hear that Paris Hilton will be out of town for a few days. A quick Google search gives them her street address, and they even find her key under the doormat (a detail that was not invented for the movie). They're soon joined by their friends Nicki (Watson), her adoptive sister Sam (Farmiga) and Chloe (Claire Julien), embarking on a wild spree of robbing other celebrity houses for cash, jewelry and designer clothes.

The film opened the "Un Certain Regard" section of the 2013 Cannes Film Festival.