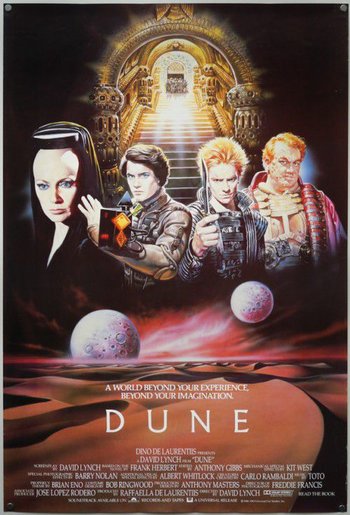 "The Sleeper must awaken."
"A secret report within the Guild. Four planets have come to our attention ... regarding a plot which could jeopardize spice production. Planet Arrakis, source of the spice. Planet Caladan, home of House Atreides. Planet Giedi Prime, home of House Harkonnen. Planet Kaitain, home of the Emperor of the Known Universe. Send a third stage Guild Navigator to Kaitain to demand details from the Emperor. The spice must flow..."
— The Spacing Guild
Advertisement:

FATHER, THE DESCRIPTION OF DUNE HERE HAS AWAKENED!

Dune is the 1984 feature film adaptation of Frank Herbert's novel Dune, directed by David Lynch. The film is famous for its unique visual style, obtuse plot and very Troubled Production.

The film adaptation of Dune was originally given to the experimental filmmaker Alejandro Jodorowsky, who planned to very loosely adapt the book while basing most of the film on a dream he'd had. He recruited a rogue's gallery of names for his project, including comic artist Moebius, H. R. Giger, Pink Floyd, Salvador Dalí and Orson Wellesnote One of the most notable fallouts from this assemblage is that writer Dan O'Bannon and HR Giger met on this production, and O'Bannon brought some of Giger's work to show the director of the next project he was involved in. Unfortunately, Jodorowsky burned through his budget before filming a single scene, and the project was ultimately taken away from him. A feature-length documentary titled Jodorowsky's Dune chronicles this project of epic proportions that went nowhere. Jodorowsky later recycled many of his ideas in his epic graphic novel series The Saga of the Metabarons.

Producer Dino De Laurentiis handed the film to another experimental director, David Lynch, who was a hot prospect at the time due to his cult classic debut film Eraserhead and the critically lauded The Elephant Man. Lynch scrapped most of Jodorowsky's plans and made a film much closer to the book, although still guided by his own unique vision. Lynch's completed work is memorable (and notorious) for its Freudian imagery, elaborate costumes and set designs (containing several holdovers from the Jodorowsky version, including some of Giger's designs), and All-Star Cast, which in addition to MacLachlan features Patrick Stewart, José Ferrer, Brad Dourif, Dean Stockwell, Sean Young, Jürgen Prochnow, Virginia Madsen, Sting, Siân Phillips, Linda Hunt, and Max von Sydow, among others.

Due to Lynch's alien style and the sheer scale of the book, the already-complex narrative became nearly incomprehensible to some viewers; many theaters handed out printed plot summaries to patrons. An altered cut with more exposition to explain the plot was made for television, which ran at almost four hours (with commercials). Incensed at the Executive Meddling, Lynch had his director credit for this extended cut changed to Alan Smithee and his screenwriting credit changed to Judas Booth (as in John Wilkes). Subsequent recut and extended versions have inspired varying degrees of critical reappraisal. It was a complete flop at the box office, but it has become a genuine Cult Classic since.

For the other live-action adaptations of Dune, see Frank Herbert's Dune and Dune (2021).

The Dune film contains examples of:

"And how can this be? For he is the Kwisatz Haderach!"