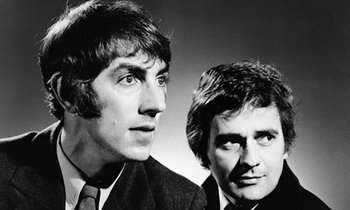 Not Only, But Also: Peter Cook (left) with comic partner Dudley Moore
"I went to the University of Life and was chucked out."
Advertisement:

Peter Edward Cook (17 November 1937 – 9 January 1995) was an English actor, satirist, writer and comedian. An extremely influential figure in modern British comedy, Cook is regarded as the leading light of the British satire boom of the 1960s. He was closely associated with the anti-establishment comedy that emerged in Britain and the United States in the early 1960s. He was the proprietor of Private Eye from soon after its foundation until his death, and contributed both money and jokes to it throughout his life, while staunchly refraining from any editorial interference. An Oxbridge graduate, he formed a comic partnership with lifelong friend Dudley Moore which resulted in the hit revue Beyond the Fringe, and then their TV series Not Only... But Also; the film Bedazzled (1967), and the notorious taboo-breaking Derek And Clive comedy albums. Whilst Moore went on to Hollywood superstardom, Cook languished in semi-obscurity, a state not helped by the drinking problem that eventually killed him.

In 1983 Cook had a guest role in the first series of Blackadder in which he played an annoyed and post-mortem King Richard III. In 1987 he had a memorable cameo in The Princess Bride as the Impressive Clergyman ("Mawwiage!"). In the same year he appeared on the British version of Whose Line Is It Anyway? and won.

In 1989 he married for the third and last time and under the influence of his new wife he cut down on the drinking and recovered a good deal of his old power.

In 1993, he and Chris Morris improvised a fantastically insane series of interviews for BBC Radio, Why Bother?, in which Cook responded to Morris's characteristically aggressive style with increasingly absurd flights of imagination. Around the same time, Cook appeared in character as all four guests on the Channel 4 chat show Clive Anderson Talks Back: Norman House, a meek quality controller who had been abducted by aliens; Alan Latchley, a bluff Northern football managernote "Football is about nothing unless it is about something and what it is about is football!"; Sir James Beauchamp, a ridiculously bigoted upper-class judgenote "Capital punishment's been abolished for some time now." "Yes it has. Except in my neck of the woods. It's very much an individual choice, I think, whether one executes." and Eric Daley, an egotistical but talentless veteran rock starnote "I just got out of the Henry Ford clinic, and I'm -" "Henry Ford clinic?" "Yes." "Not the Betty Ford clinic?" "No, the Henry Ford one is a much tougher regime. You have to build a car before you're allowed out." The Clive Anderson appearance featured Cook at his best. However, the following year, the death of Cook's mother caused him to resume drinking heavily and he died in January 1995 from complications related to his alcoholism.

In 2005, Cook was ranked at number one in the Comedians' Comedian, a poll of over 300 comics, comedy writers, producers and directors throughout the English-speaking world.

Tropes scowled down upon and treated with withering scorn and self-aware contempt include: