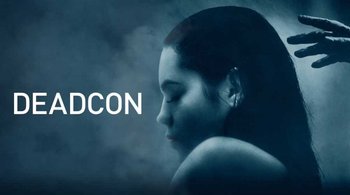 Deadcon is a 2019 horror film directed by Caryn Waechter and starring real-life YouTube personalities Lauren Elizabeth and Claudia Sulewski as AKAshley and Megan, two of the main draws at Viewcon, a convention for YouTube personalities. Ashley is wanting to get out the limelight, but her manager Kara (Mimi Gianopulos) doesn't want to lose hold of the lightning in a bottle they've captured together. Megan is grappling with her attraction to gaming livecaster Dave (Keith Machekanyanga), but has yet to break up with her boyfriend, Ricky. Meanwhile, a double-booking has resulted in Ashley being roomed next door to Megan in suite 2210A, which may be haunted by the ghost of Bobby, and the malevolent spirit of the founder of the failed 1984 internet chat service, Linkrabbit...

This film involves the following tropes: