Film / Beast of the Yellow Night 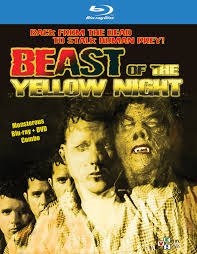 Beast of the Yellow Night is a 1971 Filipino-American horror film.

In 1946 Joseph Langdon, Army deserter and murderer, was fleeing pursuit in the jungles of Southeast Asia when a sardonic voice made him an offer he couldn't refuse.

In 1971, Phillip Rogers dies unexpectedly in the hospital. When his grieving wife is allowed to see him, all the onlookers are astonished to find the supposedly dead man blinking and moving around...