Film / The Beast of War 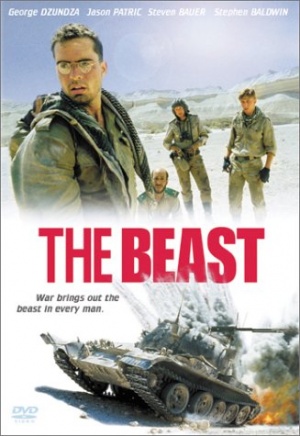 "Well, sir, the roadwheel's cracked. Kaminski drank our brakes. We're low on petrol. The battery's low. We're losing oil. If the engine heats up it's gonna seize. The terrain, obviously against us. We have no rations. The Mujas behind us don't seem to run on rations, petrol, or anything we know of. And they have an RPG. Their aim is getting better. Sir."
Advertisement:

The Beast of War (also known as The Beast) is a 1988 American war movie based on the play Nanawatai by William Mastrosimone.

During the Soviet Invasion of Afghanistan, a T-55 tank becomes separated from the main body of the army after obliterating an Afghan village. Trapped in a dead-end valley and hunted by vengeful mujahideen, the crew gradually turn on each other. The brutal tank commander Warrant Officer Daskal (George Dzundza) grows paranoid about their Afghan Army guide Samad (Erick Avari) and clashes with the independent-minded driver Konstantin Koverchenko (Jason Patric), with the gunner Kaminski and loader Golikov (Stephen Baldwin) caught in the middle.