Film / The Beast of Hollow Mountain 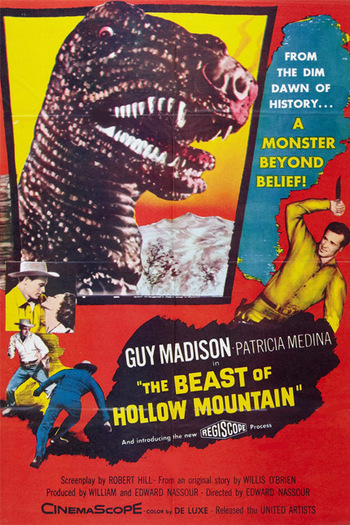 "I was expecting something hairier, like a yeti, or a chupacabra...."
Advertisement:

The Beast of Hollow Mountain is a 1956 Weird West film starring Guy Madison.

Amidst rumors that the eponymous mountain outside a small village in Mexico may be cursed as farmers and their cattle never return from it, American rancher Jimmy Ryan (Madison) butts heads with the hard-headed Enrique (who believes that Jimmy is trying to steal away his fiance, Sarita), pals around with fellow rancher Pancho and his son Panchito, and attempts to solve the mystery of why people and animals who wander into Hollow Mountain never seem to return. He and his friends eventually discover that a Tyrannosaurus Rex lives, and havoc ensues.

This movie was featured in the fifth episode of the reboot of Mystery Science Theater 3000. Tropes pertaining to said episode can be found here.

Tropes found in this movie include: