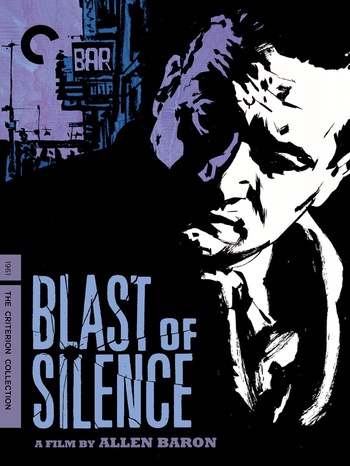 Holiday cheer won't be in this Christmas movie.
Advertisement:

Blast of Silence is a 1961 Neo-Noir thriller. Written, directed, and starring Allen Baron as the main "hero", the film tells the story of a hitman named Frankie Bono, who comes to New York City during Christmas time in order to carry out a contract on a low-tier mobster.

Of course, this being a noir, nothing goes quite as smoothly as planned. Frankie finds himself having to contend not only with taking out his target, but also his reemerging feelings for a girl he knew as a child. Will he be able to accomplish his goals, or will the New York chill swallow him up as well?

Created on the tail end of the Film Noir craze and being an independent production, Blast of Silence remained relatively obscure to anybody besides hardcore film aficionados who saw it at some film festivals. However, it gained some traction again when it was re-released on DVD by The Criterion Collection in 2008, and some critics consider it to be one of the finer independent productions of the 1960s.

Blast of Silence contains examples of: