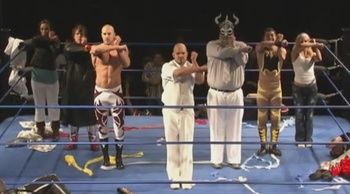 Die Bruderschaft des Kreuzes ("The Brotherhood of the Cross" in German) was a Professional Wrestling Power Stable in CHIKARA. The group formed at the end of the 2009 Season Finale Three-Fisted Tales on November 22, 2009, as the culmination of storylines going back to 2007. At The Sordid Perils of Everyday Existence, November 11, 2007, Shane Storm had defeated Hydra, a member of UltraMantis Black's The Order of the Neo-Solar Temple, when Hydra essentially sacrificed himself to end Storm's losing streak. Later that night, Chris Hero defeated Equinox (Vin Gerard) in a Mask vs. Hair match by breaking the CHIKARA Specialnote a submission hold innovated by Mike Quackenbush to utilize against Hero and subsequently taught to the entire tecnico side of the locker room. Hero - top heel - would have a short losing streak against old enemies and midcarders, all of whom made him tap to the CHIKARA Special and forcing Equinox to tap out to the hold himself. It would slowly be revealed that Storm was the one who sold out the tecnicos by giving the counter to Mantis who gave it to Hero, and that Mantis and CHIKARA Commissioner Bob Saget (yes, that Bob Saget) had brokered a deal to send Hero to wrestle for Dr. Cube, the Big Bad of Kaiju Big Battel, in exchange for Cube giving Mantis the Eye of Tyr, a Norse Mythological artifact that can be used to control minds.

At CHIKARA Young Lions Cup VII Night III, August 16, 2009, there was a four-way tag team elimination match with Team F.I.S.T. (Icarus and Gran Akuma) vs. Chiva V/Halcon Guerrero vs. The Colony (Soldier Ant and Green Ant) vs. The Order of the Neo-Solar Temple (Mantis and Delirious). It came down to F.I.S.T. and the Order. A masked man in white walked to the ring and placed a box in the Temple's corner, distracting Mantis enough for Akuma to pin him. After the match, Mantis opened the box and found it contained a message reading "A War Is Coming."

At Cibernetico Increible on October 18th, there was a Trios Increibles match with The UnStable's Colin Delaney, the Temple's Crossbones and Icarus vs. Team F.I.S.T.'s Chuck Taylor, The UnStable's STIGMA (the former Shane Storm) and Mantis. During the match, the masked man appeared on the video screen, and then he and a much larger man showed up, scaring Mantis away from the match. That same night, Carpenter Ant won the Cibernetico match by making Soldier Ant tap out to the Inverted CHIKARA Special, which Mike Quackenbush had supposedly taught only to Tim Donst. At Three-Fisted Tales, the main event was CHIKARA Campeones de Parejas

The Colony (Fire Ant and Soldier Ant) defeating The Osirian Portal (Amasis and Ophidian). After the match, the two masked men walked out, with the larger man actually pushing down the guardrail. The regular-sized man took the mic and cut a promo starting with the first quote above. Many CHIKARA wrestlers made their way out to see what was happening, with Quackenbush and Claudio Castagnoli confronting the two men. The man pointed to The Order of the Neo-Solar Temple (Mantis, Delirious and Vökoder) and said, "Send me the man with the real power." The Order walked to the ring, with Mantis handing Vökoder the Eye of Tyr. Mantis told the two men, "I'm sick of all your video threats. I'm sick of you interfering in my business. And quite frankly, I'm sick of you. I don't even know who you are." The larger man removed his mask to reveal a horned mask. His name would later be revealed to be Tursas. Then the regular-sized man removed his mask, causing Mantis' two years of machinations to completely blow up in his face. The man would be revealed to be Ares, Claudio's former Swiss Money Holding partner who had last been seen in CHIKARA in 2006. Quack turned to Claudio, who hit him with a European Uppercut. Carpenter Ant attacked The Colony, Vökoder attacked UltraMantis Black, Sara Del Rey and Daizee Haze made their way out and just attacked whoever was available, and all seven heels completely cleaned house. They all stood shoulder-to-shoulder, and Ares instructed Carpenter Ant to unmask, revealing Pinkie Sanchez. Then Vökoder unmasked, revealing Tim Donst, who had appeared earlier that night as himself.

They would go on to dominate CHIKARA, with 2010 consisting mostly of the CHIKARA locker room trying to unite against them and being unable to slow their roll. Lince Dorado, a tecnico who had struggled to be accepted by the fans, defected to the Bruderschaft, and Ares used the Eye of Tyr to mind control Delirious. Their first major setback came in the 2010 Torneo Cibernetico, which was won by Eddie Kingston eliminating Tursas in the final fall.

By mid 2011 the Bruderschaft was starting to fragment. Sara del Rey and Daizee Haze had earned the right to compete for a shot at the Campeones de Parejas, but Ares and Claudio were the Campeones at the time and Ares ordered them to stand down. They subsequently lost a match and their rights to a title shotnote in CHIKARA, teams earned 1 point for winning a match, earned a title shot at 3 points, and a loss reset their points to 0. This lead to Sara and Daizee getting kicked out of the Bruderschaft, with Daizee suffering a career-endingnote she chose to retire due to issues with anorexia chokeslam in the process. Sara got her revenge in the 2011 Torneo Cibernetico, and then... Claudio was signed by WWE, depriving the Bruderschaft of it's central figure. Ares acquired a personal ring announcer named Jakob Hammermeier around this time.

With Claudio gone to WWE, Del Rey and Haze having been kicked out, and Sanchez and Dorado having quit CHIKARA, the Bruderschaft was a shell of itself by the time it collapsed in 2012. With Ares and Tim Donst in a Hair vs Mask match against Ultramantis Black and Hallowicked, Donst abandoned Ares to save his hair, ending the stable.

The Bruderschaft returned in 2014 as a subdivision of The Flood, with Ares leading the group again with Milo Schnitzlernote The owner of Wrestling Is Cool, revealed to be a BDK member and Nøkken (another monster character similar to Tursas). Despite a surprising return from Tursas, this version of the BDK accomplished little. Tursas himself was killed off after being struck by The Estonia Thunderfrog's hammer. Hammermeier would use the Eye of Tyr to usurp control of the Bruderschaft from Ares, but he failed to lead the stable to its' former glory. Despite adding Jaka and readding Pinkie Sanchez to the group, it finally collapsed once and for all in 2016.