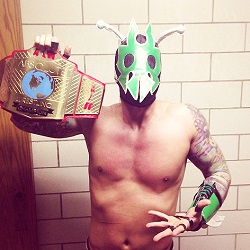 .
"TV Tropes, you have met your doom!"
Advertisement:

UltraMantis Black (born July 17, 1975) is an American Professional Wrestler best known for his work in CHIKARA, as one of the original five graduates from the original Wrestle Factory in Allentown, PA, along with Mister ZERO, Ichabod Slayne (Icarus), Hallowicked and Dragonfly, all of whom debuted at CHIKARA's first event, The Renaissance Dawns on May 25, 2002. UltraMantis Black has also competed for Big Japan Pro Wrestling and many independent promotions.

He started as a Superhero called UltraMantis who teamed with Mister Zero. This ended at CHIKARA Pick Up or Delivery on April 9, 2004. BLK OUT (Joker and Sabian) defeated Ultra/ZERO after UM went heel and told BLK OUT, "Be my guest." After the match, UM cut a promo

where he renounced ZERO, the fans, and said that he was "sick of the human species." He declared, "UltraMantis is dead. Today, UltraMantis Black is born." He then formed the team the Dark Breed with Hallowicked and they feuded with Men @ Work (Mister ZERO and Shane Storm.) UMB began suffering injuries that led to him working as a manager for his new protégé Hydra and doing commentary work.

After Hallowicked turned tecnico, UMB and Hydra formed the Order of the Neo-Solar Temple, adding Crossbones to the team. They would feud with Incoherence (Hallowicked/Delirious/Frightmare). Then came The Sordid Perils of Everyday Existence on November 17, 2007, which saw Chris Hero defeat Equinox by escaping Quackenbush's the CHIKARA Special and making Equinox submit to it himself. It was later revealed that Shane Storm had been the one who had provided UMB with the counter for the CHIKARA Special, with UMB giving it to Hero. UMB, it turned out, had sent Hero to work for Dr. Cube in Kaiju Big Battel in exchange for Cube giving him the Eye of Tyrnote An artifact that could be used to control minds, but that had to be given away after being used once or it would curse the user with bad fortune.

This ultimately backfired on UMB, as it led to Ares and Tursas showing up at the end of the 2009 Season Finale, Three-Fisted Tales and the big riot that marked the formation of Die Bruderschaft des Kreuzes. The BDK would take possession of the Eye of Tyr and use it to lure Delirious away and ultimately dismantle the Order of the Neo-Solar Temple. UMB would eventually get it back and, at The Thirteenth Hat, he used it to free Delirious from the BDK's control. Delirious grabbed it and smashed it. UMB would later form the Spectral Envoy with Hallowicked, Frightmare and Crossbones.

After going 11 years without winning a title, on November 1, 2013, he finally won his first Championship by defeating Ethan Page for the Absolute Intense Wrestling (Ohio) Absolute Heavyweight Title

"The Great and Devious Tropes":