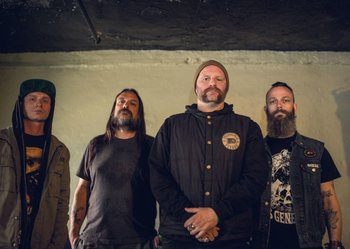 36 Crazyfists (abbreviated as 36CF) are a Metalcore act who initially came straight out of Anchorage, Alaska. Having formed in 1994, they originated from the remnants of three local bands. Currently based in Portland, Oregon, they have put out eight studio albums over the course of the 25 years that they've been together thus far.

Here is your broken list of tropes, the one left of Heaven: