Comic Strip / For Better or for Worse 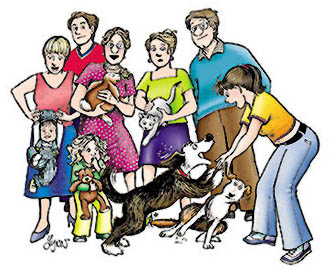 One of the more popular Newspaper Comics of its time, Lynn Johnston's For Better or for Worse debuted in 1979 and ran until 2008, appearing in over 2,000 newspapers at its peak.

Set in Milborough (a fictional suburb of Toronto, Ontario, Canada), the strip's main characters are the Patterson family: mild-mannered parents Elly and John and their children Michael, Elizabeth, and April. All but April are based closely on Johnston's real-life family: herself, her (now ex-) husband Rod, and their children Aaron and Katie. Johnston claimed that she created April because she wanted another baby, but knew it wasn't practical for her in real life.

The strip is perhaps best-known for the fact that, unlike most comic strips, it did not use Comic-Book Time, and took place more or less in real time for most of its run. Michael and Elizabeth were a young child and a toddler at the strip's beginning, and by the end had grown into adults, with Michael married and raising his own children while Elizabeth married at the end of the strip. Youngest child April was born 11 years into the strip's run and was roughly 16 at the strip's conclusion.

In its heyday, the strip was also celebrated for its realism, eschewing Sitcom stereotypes in favor of a nuanced, relatable look at typical adult, child and teen concerns. A storyline in which a supporting character came out as gay cemented this reputation, as well as various stories dealing with prejudice, bullying, the mentally and physically handicapped, theft, cheating and abuse. The Pattersons were often shown as a good, "normal" family, often forced to deal with others from broken homes or worse situations.

Unfortunately, the same intimacy that allowed Johnston such insight also takes in her shortcomings and shortsightedness, something the author herself (a proudly self-described "Child of The '50s") has acknowledged. This became steadily more apparent in the strip's final years, as — concurrent with Johnston's discovery that her husband was cheating on her and the subsequent messy divorce — the strip wound down and the characters all began settling into domestic bliss rather than continue being exciting young adults, resulting in two of the three Patterson kids marrying their childhood sweethearts due to massively contrived circumstances. Much speculation ensued from disappointed fans over this development, in particular whether or not Johnston may have been attempting to deal with her personal trials by creating the life she wanted for herself through the strip.

Starting in September 2007, flashbacks to the early years of the strip were interspersed into the present-day plotlines. The last regular daily strip of For Better or For Worse was published on August 30, 2008, and the last Sunday strip was published the next day. Though Johnston had announced her retirement from the strip entirely, she relented, largely due to the collapse of her marriage removing one of her key motivations for retiring. To ramp down her workload, starting in September 2008, Johnston began in effect to retell the strip from the beginning, through what she described as "new-runs". For some time, the strip consisted of a mixture of reprints from the early years with newly drawn strips also set during the era when Michael was a young child and Elizabeth was a toddler. In 2010, the new-run strips were phased out, and the strip remained in syndication but almost exclusively with straight reprints. As of 2022, the For Better or For Worse strips appearing in newspapers generally correspond exactly to those which originally appeared 39 years before. Only rarely does this pattern change, with an occasional new strip being drawn to ensure that holiday-themed strips appear on the relevant holiday.

This strip includes examples of: