No Guy Wants to Be Chased 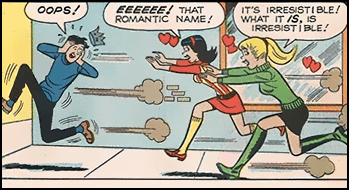 "Hey, that's not how Tag works!"
"Lookit, the only thing men actually care about as far as dating is concerned is 'The Chase.' If you want that guy to look your way, listen to me carefully, ignore the living hell out of him."
— Dr. Cox, Scrubs
Advertisement:

This is where a guy is shown to be actively put off by a girl's aggressive pursuit of him. Conversely, if she were more shy and modest about her feelings, he would like her more. The use of this normally implies that men want to be the ones to chase and pursue a relationship, and hate it when it looks like, for any moment, this is not the case. To put it simply: a man wants to catch a woman; not be caught.

This trope may be the reason why the guy will not be afflicted with The Dulcinea Effect towards this girl. To contrast, he will instead be shown to be afflicted with it towards a girl who is more passive. It doesn't matter whether the girl is (or isn't) an Action Girl—even if she's strong in combat, as long as she's shy romance-wise, she'll still be more desirable compared with a Damsel in Distress who is too eager. Compare My Girl Is Not a Slut; the logic may be that a woman so eager to pursue one man will be just as eager to pursue another man. (As if it had nothing to do with her crush on one particular man.)

On the other hand, it may be that the girl comes on too strong for the guy, who might otherwise return her affections. If the girl is a yandere, then running away as fast as possible is understandable.

Compare with No Guy Wants an Amazon, where the man feels threatened because the girl is physically more intimidating (overlap between the two is common), and Unwanted Harem (If the man is chased by an entire ensemble of girls).

Aggressiveness is often a trait of the Abhorrent Admirer, though it's definitely not the only trait that puts the guy off. If the girl stops chasing him, it could lead to an Unrequited Love Switcheroo.

Aggressive Submissive may come into play on either side: For females, suddenly becoming submissive when things actually turn affectionate may be treated a way to "make up for" their pursuits. For males, it tends to expose their insistence to be the "chaser" as posturing—they wanted a woman who takes the lead, but not when people are looking.

It's prevalent in anime, as the Japanese have different ideas of gender roles relative to the Anglosphere and Europe.