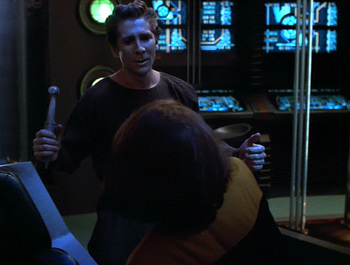 Insert your favorite Slasher Movie soundtrack here.
On the day that Lt. Tuvok gets a promotion to Lieutenant Commander, Voyager receives a distress call from an isomorphic projection who claims to be the only one left on board a space station after all its crew have been killed. The Doctor and Lt. B'elanna Torres respond to the call and discover some disturbing facts. Meanwhile, as Lt. Tom Paris fills in for the Doctor in Sickbay, Ensign Harry Kim deals with having to work with Seven of Nine because he feels attracted to her.