Literature / Petals on the Wind 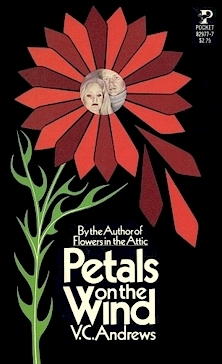 They were such brave children to withstand such suffering. Such clever children to escape such terror!note Cover of the first US edition, by Milton Charles, Myles Sprinzen and Gillian Hills
Then the wind came in with Bart and blew the vase of roses from the table. I stood and stared down at the crystal pieces and the petals scattered about. Why was the wind always trying to tell me something? Something I didn't want to hear!
Advertisement:

Petals on the Wind, written by V. C. Andrews, published in 1980, is the second book in the Dollanganger Series.

The plot picks up immediately after the events of the first novel after the Dollanganger children escape from the attic. The kids are adopted by Paul Sheffield, a kindly doctor who puts them each through school. Cathy finally fulfills her dream of becoming a world-famous ballerina, using her fame to fuel her revenge against her mother, while becoming embroiled in a series of tempestuous love affairs, including her Will They or Won't They? relationship with her brother Chris. Everyone Has Lots of Sex, until tragedy strikes, hardening Cathy's resolve to expose her mother's murderous lies and claim victory over her own past.

For the 2014 Lifetime Movie of the Week see Petals on the Wind.