Literature / If There Be Thorns 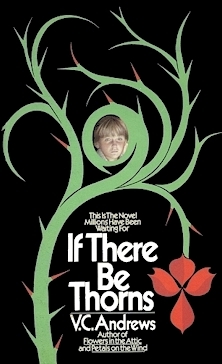 Out of the ashes of evil Chris and Cathy made such a loving home for their splendid children...note Cover of the first US edition, by Milton Charles, Myles Sprinzen and Gillian Hills
It is their story now, Jory's and Bart's, and they will tell it as they knew it.
—Prologue, If There Be Thorns
Advertisement:

If There Be Thorns, by V. C. Andrews, published in 1981, is the third book in the Dollanganger Series. It is told from the point-of-view of Cathy's sons Jory and Bart, notably the only book written by Andrews herself to be told from a male POV.

In an effort to leave their past behind them, Chris and Cathy move to California and live as man and wife under the name of Sheffield, along with Cathy's sons from two other men: handsome, talented Jory and lonely, confused Bart. Cathy tries to create a normal life for her sons, but she lives in terror of the day that the family's secret is discovered. The boys suspect something strange is happening in their home, but Bart, already mentally troubled, begins to withdraw from the family. Instead, he finds comfort with the mysterious woman next door, who invites him over for cookies and cake and asks him to call her "Grandmother." But the Woman in Black is accompanied by her sinister butler John Amos, who feeds Bart's darkest fears by convincing him that his mother is the worst kind of sinner, and that the only redemption for sinners is death...

As his family begins to shatter all around him, as his younger brother slowly becomes possessed by a dark religious need for vengeance and power, Jory becomes determined to learn the strange secret of the woman next door... the same secret that seems to involve his parents.

For the 2015 Lifetime Movie of the Week see If There Be Thorns.