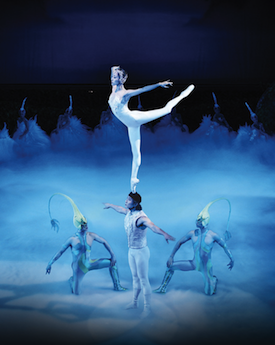 See the dance they do, all the little ballerinas...
Advertisement:

They're ballet dancers. They're participants in a traditionally feminine activity. So they've got to be delicate, almost ethereal fairy-like creatures, right?

Simply put, this is when ballet dancers are portrayed as delicate little flowers of femininity, even though in Real Life ballet is by its very nature as physically taxing as most contact sports, if not more than the lightest ones (the most famous example is Jean-Claude Van Damme, who took up both ballet and Karate while growing up and is usually fast to point out the former as the hardest). Long-time injuries in legs and toes are a perennial bane of ballet dancers after relatively short careers, with complications and pain common even after retirement.

Even though ballerinas are the most usual example, male dancers get this just as often, despite the fact that they need to be strong enough to so much as lift their partners overhead with the maximum level of gracefulness possible (compare this with Professional Wrestling, in which doing exactly the same is relegated to the physically strongest workers in the ring!). Ballerinas are usually just as strong themselves muscle-wise in their lower bodies, as they need it to leap very high and land harmoniously without the natural, crouchy moves that make it easier for the rest of mortals. In addition, they need to have the foot strength and balance necessary to spend a great deal of time on literal tip-toes without falling over, sometimes as the starting or ending point of said high leaps.

This trope is full of Unfortunate Implications, both because it underplays the physical aspect of ballet and because it reinforces old, sexist ideas of manhood, making any man who does ballet a "sissy."