Literature / The Vale of Lost Women 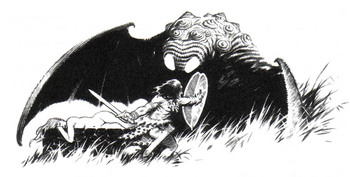 "The Vale of Lost Women

The story begins with Livia, a soft and civilized young woman, as a prisoner of the Bakalah jungle tribe, who have captured her and have killed the brother she was traveling with using excruciating savage tortures. Conan soon appears as the leader of Bamulas, a rival tribe which nonetheless is about to parlay a truce with their rivals. Thinking Conan, being a white man, may feel some kinship with her and assist her, Livia asks him for his help. When Conan balks at her proposal, Livia offers him herself as a sexual reward for rescuing her.

Keeping his side of the bargain, Conan and his warriors slay the Bakalah and their brutal chief after engaging with them in an uncivilized revelry which lasts all night and does much to disgust the proper and civilized girl. Then, when Livia sees Conan drenched in blood coming toward the hut she is kept in, figuring he immediately wants to claim his reward, she breaks their agreement and flees into the thick of the jungle (her clothes ripped off in the process, leaving her naked for the remainder of the adventure) to a strange valley with beautiful blossoms, inhabited by strange brownish-skinned women with apparent lesbian inclinations.

Glad to have found shelter from the blood-soaked "male brutality" of her Cimmerian pursuer, Livia is so enraptured at the eerie beauty of the women and dazed by the hallucinogen scent of the flowers that she barely notice being led to an altar-like section of the glade, where she is to be sacrificed to a bat-like entity. Conan, having pursued her, is soon forced to intervene again on her behalf; after having fought and driven away the demon, Conan jokingly scolds her for having fled, saying he never had the intention to force her into having sex, which in his view would have been as damnable an action as raping her, and that he will soon let her leave the Black Kingdoms since she's too soft to be a proper partner for a Bamula warchief.