Literature / Rogues in the House 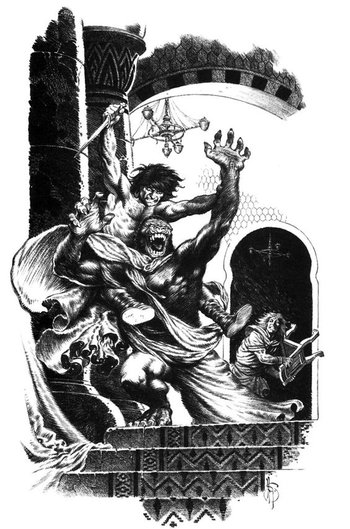 "Rogues in the House

" is a Conan the Barbarian story by Robert E. Howard. First published in January, 1934.

Conan is sitting in prison after killing a priest (he had it coming) when he is approached by a nobleman named Murillo, who has a proposition for him: kill the Red Priest Nabonidus for him, and he will provide Conan a horse, a sack of gold, and a one way ticket out of town and away from the gallows.

Conan escapes from jail, and, after dealing with the prostitute who turned him in, heads off to Nabonidus's mansion. Conan tries entering through the sewer, only to get stuck down there thanks to one of the mansions traps. While down there, he runs into Murillo, who had arrives there first with the intention of killing Nabonidus himself, thinking Conan had high tailed it out of town. They soon discover Nabonidus trapped down there as well, a prisoner in his own home.

Turns out Nabonidus's servant, a man-ape named Thak, has rebelled against his master, and now uses the assortment of traps set around the mansion to keep out unwanted guests (and keep his prisoners in). The three rogues will have to work together if they ever want to get out of the mansion alive, lest they fall victim to Thak, or perhaps, to each other.

The story has been adapted by Marvel Comics in their Conan the Barbarian comic, as well as by Darkhorse Comics.

Notable as being one of Howard's personal favorite stories, and one of the stories that he was most happy with the finished result, only having to go through two drafts before publishing. He also remarked on how he was especially happy with the story as his editor didn't force him to add a fetish/nude scene, which was almost a requirement for pulp stories at the time.