Literature / The Devil in Iron 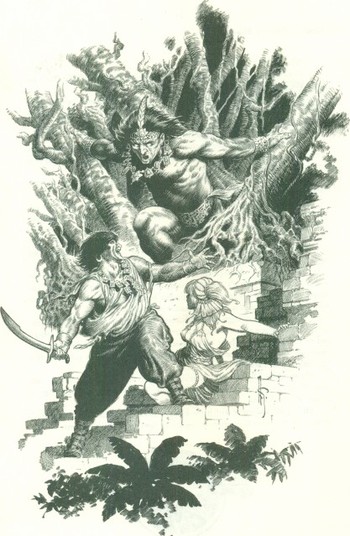 "The Devil in Iron

" is a Conan the Barbarian story by Robert E. Howard. First published in August, 1934.

A fisherman lands on a deserted island, where he finds a dagger resting on top of a statue as hard as iron. He takes the dagger for himself, only for the statue to open its eyes...

Conan has been leading a band of kozaks for some time, and it's causing no end of problems for the local Turanian governor Agha. Noting Conan's predilection towards Damsels in Distress, he decides to use his most beautiful slave, Octavia, as bait to lure Conan into a trap. Octavia, looking to escape her enslavement, warns Conan of the attack, and the two flee to a deserted island in the middle of a lake. Unfortunately, this was the governor's plan all along, and with his best men he follows them.

On the island, Conan and Octavia are shocked to find a city that wasn't there the day before, full of hanging tapestries, golden banquet halls, and beautiful sleeping people. Heading for the center of the city, they find its keeper, Khostral Khel, a millennia-old Humanoid Abomination who has just awoken from his long slumber, and who has now brought the city back to its former glory.

Trapped and with nowhere to run, Conan and Octavia must contend with a giant serpent, Agha's forces,and the horror of the devil in iron.

Has been adapted into comic form by Marvel Comics in The Savage Sword of Conan, and most recently by Darkhorse Comics in their book Conan the Savage.