Literature / Death on the Nile 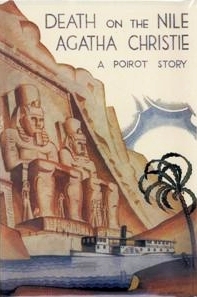 Death on the Nile is a 1937 mystery novel by Agatha Christie.

Hercule Poirot is on holiday in Egypt, on a Nile River cruise. Among the other passengers is Linnet Ridgeway, a rich, beautiful heiress, honeymooning with her husband Simon Doyle. Doyle was engaged to Linnet’s best friend, Jacqueline de Bellefort, before he met Linnet, and broke it off. Heartbroken and wanting revenge on her former friend for stealing her fiancé, Jacqueline started following them everywhere they go. When Linnet gets killed, Jacqueline is the obvious suspect. But is that really the case?

Christie adapted the story as a stage play titled Murder on the Nile in 1944. The story was later adapted as a 1978 film boasting an All-Star Cast that included Peter Ustinov (the first of six times Ustinov played Poirot in film or television), Maggie Smith, Bette Davis, Mia Farrow, David Niven, and Angela Lansbury. It was directed by John Guillermin. The story was also adapted for BBC Radio 4 in 1997, with John Moffatt playing Poirot. In 2004 it was adapted for the ninth season of the Poirot television series starring David Suchet; tropes for the adaptation are listed on the series page. A second feature adaptation, directed by and starring Kenneth Branagh as Poirot, was released in February 2022.

The original book provides examples of:

The BBC radio adaptation has examples of:

Murder on the Nile has examples of: