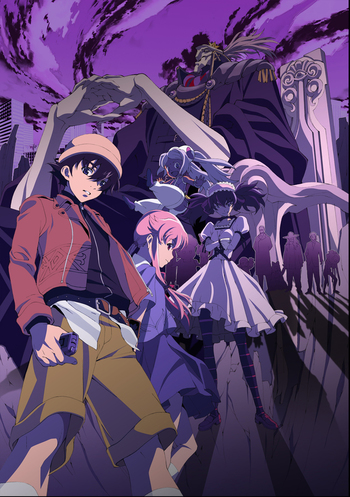 The rules are simple: Outsmart and kill all the others to become a god.
"What are you scheming?"
"An interesting game."
Advertisement:

Future Diary (known as Mirai Nikki in Japan) is a dark manga by Sakae Esuno about the asocial Yukiteru Amano, who obsessively keeps journals. One day, he finds that his imaginary friend Deus Ex Machina, the lord of time and space, has made his cell phone diary able to predict the future. After getting over the initial shock of having a supernatural cell phone, Yuki enjoys his newfound powers until he comes across a diary entry stating his exact time of death...

After taking out his would-be murderer, Yuki is invited to a gathering with ten other people, where Deus explains that they are now in a Battle Royale for the position of God. Some of the diary holders have personal reasons to claim the throne; others are psychotically insane. And soon enough, young Yuki finds himself struggling to stay alive without any true friends or allies aside from Yuno Gasai, a classmate who has been obsessively following him around without him realizing...

The common traits of all twelve diaries are as follows:

Mirai Nikki also has two spin-off manga. The first is Mirai Nikki: Mosaics, focusing on the ninth diary holder Minene Uryu and expounding on several of the minor characters. The second is an Alternate Timeline spin-off, Mirai Nikki: Paradox, in which Aru Akise replaces Yuki as the main character.

The manga was serialized in Monthly Shonen Ace from 2006 to 2010, and compiled into 12 volumes. It was licensed in English by Tokyopop; 10 of its 12 volumes were released before the US branch of the company went under. An animated adaptation aired between October 2011 and April 2012 with a pilot OVA

A live action drama called Mirai Nikki: Another World began airing in Japan on April 1st, 2012, based in an alternate world featuring a familiar plot but with a new cast of characters, of which some (but not all) strongly resemble the anime cast. Arata Hoshino takes Yuki's place, a Lazy Bum of a college student who has no interest in his future. That is until he receives a limited release cell phone from his friend Rui Moriguchi which happens to have the Future Diary's powers. Now stuck in his own survival game, with his own version of Yuno for company. The plot however develops into a very different direction from the anime.

An expanded epilogue, titled Mirai Nikki Redial, has been released, featuring a similar ending to that of the manga.

is licensed by Funimation, and Redial's license was announced in August 2017.

Compare and contrast Death Note, which also features a "notebook" as a centerpiece, although in that case the diary controls the future rather than predicts it. Also compare and contrast Kamen Rider Ryuki, which also features a "There Can Be Only One" style royale amongst 13 individuals; also compare Kamen Rider Gaim which features a similar style as Ryuki where the winner would also potentially become god; also compare Danganronpa, which features a similar Battle Royale setup. See also Devil Survivor, for the counterpart "Laplace Mail".

Definitely not to be confused with Yume Nikki, although there may be some connection in there somewhere.

The manga features the following tropes:

The anime features the following tropes: